“Frog Music” is the newest novel from Emma Donoghue, the bestselling 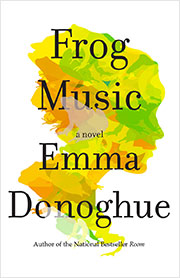 author of the novel “Room” which I found to be a riveting story that I couldn’t put down.  “Frog Music” did not live up to this standard.

Based on an unsolved crime from the late 1800’s, Emma Donoghue did extensive research and wrote a “what if?” story based on newspaper articles.  There are two main characters, Blanche and Jenny.  Blanche is a prostitute who is run into – figuratively – by Jenny.  Jenny has been arrested multiple times for wearing men’s clothing.  The story begins with the murder of Jenny, and then jumps around throughout Blanche’s life, until the resolution of the murder at the end.  The title of the book comes from Blanche and Jenny’s love of singing, Jenny’s occupation catching frogs, and the fact that they are both french.

I did not find any of the characters engrossing and did not find their motivations convincing either.  There is a “surprise” twist toward the end that was clearly foreshadowed through the book.  As I went further in the book, I find myself skipping much of the exposition.

It is interesting to read other reviews of the book.  It seems people either loved it or hated it, without much in between.  I loved “Room” and would recommend it.  “Frog Music” – not so much.